It's time to address some of the myths about AAC

After four years as the CEO of TippyTalk, and as the father of Sadie, who is autistic, I’ve started blogging to share what I’ve learned about autism and non-verbal communication, hoping it may help parents or caregivers in similar situations who are looking for some guidance

Back in 2014, as we were linked with services following Sadie’s formal diagnosis of autism, the speech and language pathologist straight off made some recommendations on Augmentative and Alternative Communication (AAC) systems. (Back then, my only knowledge of AAC was of Professor Stephen Hawking and the device that allowed him to communicate and write books.)

First and foremost was PECS, the foundation for introducing Sadie (and myself) to AAC. The next step was getting an iPad and creating a library of apps (Grace, Talk to Me) for Sadie to use. Then came the creation of TippyTalk. As we’ve learned together over the last four years, here are some of the key myths and lessons I’ve learned about AAC.

Myth 1: AAC is a magic pill

When we first started with AAC, I thought I’d introduce it to Sadie and solve all our problems, but that - of course - wasn’t the case. You get what you put in, and that’s where I initially fell short. Introducing it was very difficult, and a huge part of that was all these fun apps - games, YouTube, videos, etc. - loaded on the iPad, which distracted Sadie (not even 3 years old at the time) from the focus of communication. I highly recommend only loading communications apps on a tablet to help keep children focused.

Myth 2: My child won’t be able to use AAC

Like many parents, I thought that Sadie’s cognitive skills were too delayed to use AAC successfully - but that wasn’t the case. I shouldn’t have limited her and doubted her learning capability. A year later, I’d changed my attitude as I developed TippyTalk, putting my blood, sweat, and tears into implementing it into her life - and sure enough, it only took a short time for her to comprehend how to communicate through the text message pictures. Believing in your child is key.

A lot of people stop using devices after the child exhibits challenging behaviors. I’ve been there - afraid to take Sadie’s iPad away because of sometimes violent outbursts. (Sadie is 8 now, and we’re on iPad number four, with dozens upon dozens of screen changes, which adds up to quite a lot of money.) But these behaviors came from a breakdown in communication - she was trying to tell me or her mom something, and we didn’t get it, leading to the outburst - not because of the device. Now, we look to the root of the problem - communication - to address the behavior more effectively, instead of taking away the device.

Myth 4: An AAC device will make my child stand out

Yes, an AAC device may make your child look different - it’s not every day people see a kid in a restaurant using a tablet to communicate - but not giving them the ability to effectively and efficiently communicate will lead them to behave differently, and that’s a much bigger issue. 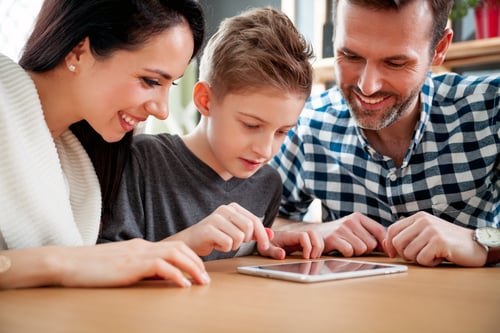 The idea that children won’t want to learn because the device “does all the work” isn’t backed up by research - in fact, early intervention and using AAC early on raises the chances of children successfully verbalizing later on. With Sadie, the communication is there - in behaviors and repetitive habits - but we have to provide a bridge between verbalization and non-verbalization, whether through TippyTalk or another AAC method. It’s all about giving our children a voice, even if we can’t always understand how they are communicating with that voice.

Some parents think that children need to start with PECS before transitioning to a low-tech AAC, then an intermediate, and then finally a high-tech AAC like TippyTalk. However, we’ve found that TippyTalk is intuitively understood by kids who have never even used tablets before. After a few minutes, they’ve figured out functionality and are sending messages.

Ultimately, AAC and intervention (SLPs in schools, etc.) are the key to building communication. Most important though is the intervention from us as parents. I started with just two pictures - mommy and daddy - asking Sadie to show me mommy. Even if she wouldn’t look at the screen, I’d help her touch her mom’s photo, and do the same with mine. Before we knew it, she touched the right picture without hesitation, and then we moved onto other categories, starting with a picture of our freezer for food. Just like that, communication was set up.

When we get caught in the myths around AAC, we inadvertently put limitations on our children’s ability (and right) to communicate. Understanding these myths is the first step to helping our children overcome their communication limitations.

About the Author: Rob Laffan

Autism Spectrum why Girls are over looked

Don't Put Limitations On Your Loved Ones.